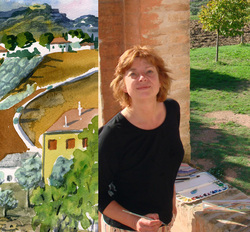 Author and illustrator Shelley Holl is known for her creative use of materials and socially-aware subject matter. Shelley’s  illustrated travel stories and essays have appeared in the Times- Picayune Newspaper of New Orleans, the Star Tribune Newspaper of Minneapolis, Minnesota and in her books:  Louisiana Dayride:52 Short Trips from New Orleans, University Press of Mississippi, 1995 ; Waterbourne Witness – Elegies for My New Orleans, Lulu Press, 2008 and Minnesota: A Fare for All Seasons, pubished by Voyageur Press in 2010.

Shelley Holl’s  watercolor, gouache and egg tempera paintings and fabric-with-oil collages have been exhibited widely.  The series Waterbourne Witness: Elegies for My New Orleans, fifteen paintings and a book, was first exhibited for the third anniversary of Hurricane Katrina in July of 2008 at the Bloomington Art Center and travelled to different venues such as the University of Minnesota and the Hennepin County Library for nearly two years. She was a recipient of a Bush Leadership Fellowship in 1990.

Since 2015, Shelley has worked on handmade scarves designed from her original paintings and art. Sketches are made while onsite, observing nature everywhere from MN and NE to countries of Africa, South America and beyond. Visit her online etsy store for all currently available scarves https://www.etsy.com/shop/ScarfArtByShelley

2016   Winter Dream painting is currently featured on a utility box on the corner of 50th and Wooddale in Edina, MN.

2016 Public Art Edina Award, A Working Group of The Edina Arts & Culture Commission for Winter Dream painting, available as a scarf. The design is currently featured on a utility box on the corner of 50th and Wooddale in Edina, MN.